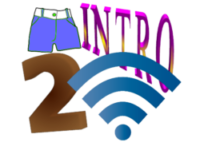 The technological advances of the 21st century created smaller, faster and more powerful personal smart devices, such as mobile phones, tablets and laptops. These devices have become an integral part of our daily lives and we use them all the time, well almost all the time. We use them for information sharing, entertainment, shopping, education, and work, just to mention a few of their usages. They are portable and wireless devices and we can use them on the bus, in the house, the garden, at the restaurant, shopping mall, and just about anywhere. They are not attached to any cables or wires, so how is it possible? The answer is WiFi communication.

WiFi security cameras are transmitters. There is no need to send a signal back, other than the WiFi network communication information. The video is received by a receiver, usually a wireless receiver that is connected to a recording device, such as a DVR or cloud storage. Then the recorded video is viewed by a monitoring device such as a smartphone, TV or computer monitor.

The personal WiFi device transmits a radio signal to the wireless router (receiver) which is using the same frequency and consequently the two devices start communicating. The personal and home WiFi devices are designed to use the 2.4GHz frequency. Newer wireless devices come also with 5GHz frequency. On dual-band (2.4GHz and 5GHz) WiFi devices both bands are active simultaneously. These devices will connect automatically to the router using ONLY one of the two bands. The selection of the band is done automatically offering the best WiFi connectivity. If the router is using only one of the bands, connectivity is only possible using that band.

With the emergence of 5G cellular communication, things could get confusing since some people refer to 5GHz WiFi connectivity as 5G WiFi. It should be clear that 5G does not refer to WiFi and 5G IS NOT WIFI. 5G is cellular technology and 5G stands for 5th Generation of cellular technology.

There are multiple IEEE 802.x specifications describing the requirements and standards for devices that will be connected and work together on a LAN. These standards cover Ethernet LAN, Token Ring LAN, authentication, etc. The IEEE 802.11 standards were developed to address wireless Local area needs and assist software and hardware developers to create a robust and sustainable wireless network.

There are multiple IEEE 802.11 standards, however, the following are used by WiFi personal and home devices:

Home WiFi routers and access points are designed and comply with IEEE 802.11b, g and n, standards abbreviated to b/g/n.

How far can a Wireless Camera Transmit a Video Signal?

A WiFi security camera can transmit its signal up to 500 feet in an open environment with a line of sight to the receiver. However, the surveillance cameras transmission range in a closed environment, is less (100-150 feet) due to the restrictions imposed by the environment, such as walls, other radio signals that can interfere, and no line of sight.

Effects on the signal because of the surrounding environment

The strength and quality of a signal can be affected by the various objects in the house causing poor quality and week video. The term for each effect and its description is provided below:

How wireless security cameras work requires a basic understanding of the WiFi technology and the various terms used. Needless to say, a brief description such as this one, only scratches the surface of the WiFi and signal transmission. The information provided will allow someone to choose a WiFi camera for the specific needs but also be useful while troubleshooting any issues that might surface during and after the installation.

I want to believe this brie introduction sets the stage for the curious mind to explore and learn more about this relatively new technology that will provide new features and functionality moving forward.

I hope you enjoyed reading this post as such as had fun writing it. If you like to provide comments and feedback you may do so using the fields below and it will be much appreciated.